1. Air Deccan is operating Beechcraft 9100 D, probably the smallest plane till date used for commercial aviation in India. It has only 19 seats. With one seat for cabin crew, only 18 is left for a passenger. 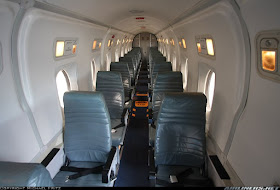 Interiors of a Beechcraft 1900D, image taken from Airliners.net

With tickets priced at around 1500, Air Deccan can make a max of 27000 per flight. After paying various fees and taxes, I am guessing around 20000 INR is left per flight for fuel, salary and all other expenses involved in operating a plane. A private Volvo Bus operator between Chennai and Bengaluru will probably be making more money per trip than Air Deccan flight. But then this is too early to pass judgment. The aircraft will be making around 6 trips a day as below- so total possible revenue of about 1-1.5 lakh per day, which is not much but not too bad to begin with
Trip 1: Nasik-Mumbai
Trip 2: Mumbai-Jalgaon
Trip 3: Jalgaon Mumbai
Trip 4: Mumbai-Nasik
Trip 5: Nasik-Pune
Trip 6: Pune - Nasik

Plus we can expect Air Deccan to be getting some government support under UDAAN Scheme, discounted/free airport charges as it is a very small plane etc. It is also possible ticket prices will be increased a bit after launch. I am sure Captain Gopinath has done his maths and will succeed.

2. The single row seating means you can have both Window Seat and Aisle seat for yourself (it is two in one!). No middle row. Just one row on each side of the plane

3. Air Deccan is not charging any convenience fee at the moment for ticket booking. No need to pay Rs 200-250 extra on top of what you see in first page. May be one of the reason AirDeccan is not yet listed on websites like MMT or cleartrip.

4. No seat selection fee as well. You're free to select your dream seat during booking. Not much info is available about meals/food on board. Given the size of aircraft and duration of flight, expect food/snacks to be bare minimum to almost nil.

5. Though Air Deccan got some media publicity by announcing Rs 1 tickets, they will be near impossible to find. Expect to pay around Rs 1500 per person per flight

6. Air Deccan is India's first low cost airline that enabled lots of people to fly for the first time. Many passengers back then, used to hide/remove Air Deccan baggage tag soon after landing, as they felt it will undermine their status if their peers saw them flying Air Deccan

7. Even though Vijay Mallya managed to buy Air Deccan and merge it with King Fisher, Air Deccan did survive all these years with its original identity offering helicopter and aircraft lease and other aviation services

8. Captain Gopinath says this will be his last stint and after this he plans to retire.

9. With only 18 seats to fill, Air Deccan will not need extensive marketing, lots of gate time etc. These many seats will easily fill up. Also they can board and deboard passengers much quicker and negotiate a discounted gate fee and other airport fee.

10. Beechcraft 1900 D can land in super small airstrips. Ideal to expand to various smaller airports yet to get commercial flights. Best wishes to Air Deccan.

11. Air Deccan will also be adding more flights around Kolkata and Delhi in coming months.